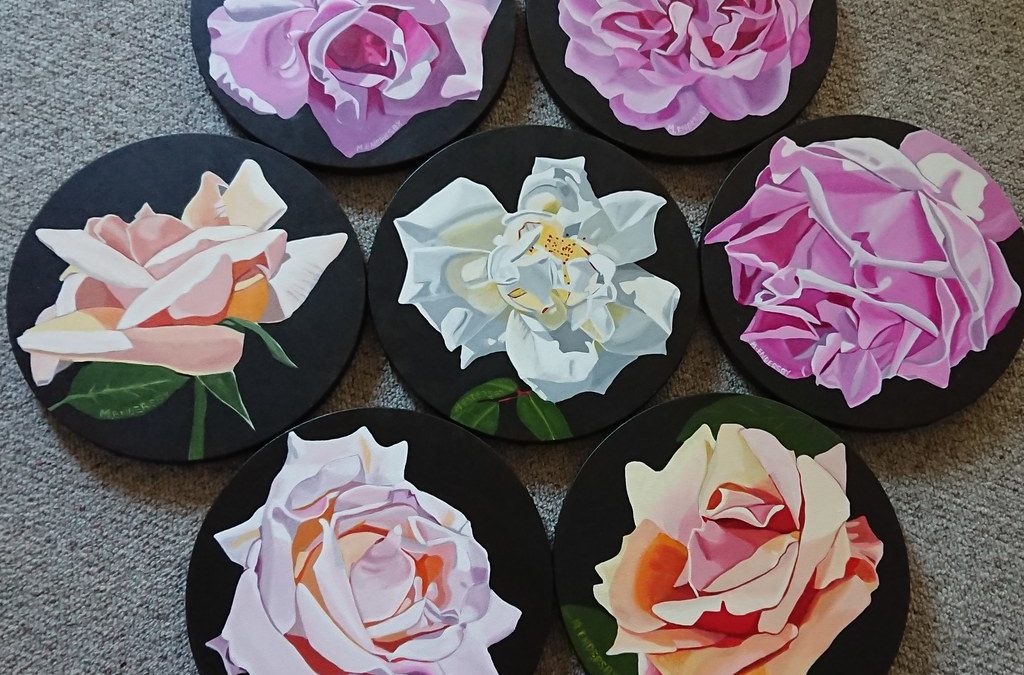 The Species Rose Collection, at the Royal Botanic Gardens Melbourne, contains more than a wonderful collection of wild roses, the ancestors of the modern roses we know today.  It also contains a lot of the stepping stones in between and takes you on journey through the history of rose hybridisation.  In this series of paintings I chose to paint some of these roses of historical interest.  If you haven’t spent much time contemplating old garden roses you will be unfamiliar with their informal beauty, subtle colour palette and names which urge you to pull out the history books.  As always, presenting a series of roses builds a story which becomes more powerful than the individual paintings.  I feel this will be a series I will enjoy adding to over the years.  These paintings are painted in acrylic on 30cm diameter stretched canvases.

Madame Lombard a tea rose bred by François Lacharme (France, 1878).
Introduced in Australia by Hazlewood Bros. Pty. Ltd. before 1911. Is variable in colour, can be pink to red, with salmon-pink shading or is sometimes light pink to white.  Only a mild fragrance if any.

Lady Mary Fitzwilliam is a light pink Hybrid Tea bred by Henry Bennett (United Kingdom, before 1880). It has a strong fragrance and a globular bloom form.

Fantin-Latour, named in honour tof the French artist, Henri Fantin-Latour. is a light pink Centifolia discovered by Edward A. Bunyard (United Kingdom, before 1938).  It has a strong fragrance and a cupped, old-fashioned, rounded bloom form which blooms once in spring or summer.

Anna Olivier is a pink blend tea rose bred by Jean-Claude Ducher (France, 1872).
It has a moderate, tea fragrance and is possibly a descendant of Safrano.

Ophelia is a fragrant light pink Hybrid Tea bred in France before 1912 and introduced in Australia in 1921.

Vestey’s Yellow Tea rose is pale yellow but ages to white.  It has ten to twelve petals and was found in Victoria, parentage or real identity unknown.