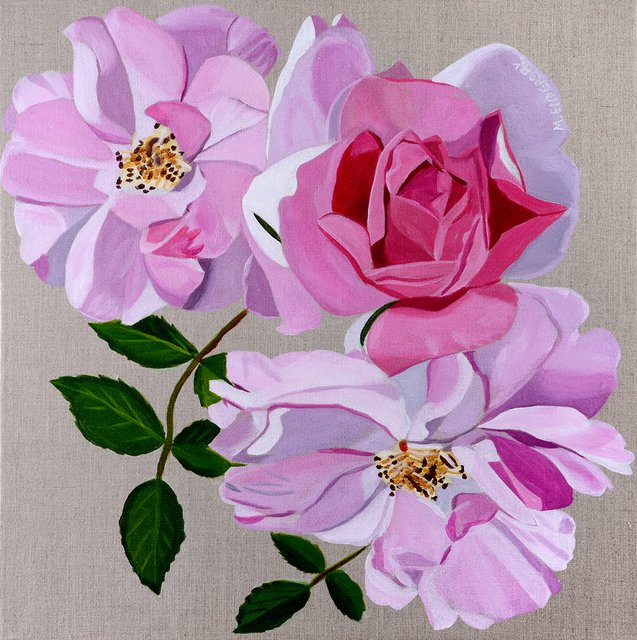 Cicely Lascelles is an Australian Bred climbing hybrid tea rose released by Alister Clark in 1937.  I couldn’t believe my luck when I came across a specimen of this rose in flower at the Colac Botanic Gardens with a plaque on it saying that it was named after the first person to drive the length of the Great Ocean Road.  I knew that this rose would have to be the feature painting for my upcoming exhibition ‘Viewpoints: Two Artistic Journeys along the Great Ocean Road’ with fellow artist Val Parker.

Let me tell you a little more about Cicely, who I feel really embodies the pioneering spirit of the Great Ocean Road.

Cicely was born in Hopetoun on 16 September 1895.  Her father Edward Harwood Lascelles played an instrumental role in opening up the Mallee and North West Victoria for agriculture. Apart from running several major runs in the Mallee and founding the town of Hopetoun on his Lake Corrong Station, EH Lascelles,(1847-1917) was a partner in the very successful Dennys Lascelles Woolbrokers of Geelong.  Cicely grew up in Geelong with four sisters and a brother who was killed in France during World War One.  She was educated at home until she was 15 then she boarded at Toorak College.  Summers were spent at ’Waverley’, the family’s holiday house at Lorne.

Cicely’s main interest was golf and she won her first major tournament in Geelong in 1915 when she was 20 years old whereupon her father signed her up as an Associate Member of the Royal Melbourne Golf Club where she was recognised as making an outstanding contribution to golf both locally and overseas. The ‘Miss Lascelles Silver Salver’ (donated by Cicely) continues to be a major annual teams golf trophy of the Lorne Country Club, held in Lorne in May each year.

The Clark and Lascelles families shared many interests including golf and grazing sheep.  Afternoon tea at ‘Glenara’, Alister Clark’s property near Bulla, was a regular outing for the Lascelles family, and Alister regularly teed off with Cicely and her father.
Gardening was also a keen interest for Cicely and when she was living at ‘Waverley’ the holiday house of her youth she established a rose garden featuring a number of Alister Clark roses including the one he had named after her.

Cicely was an early motoring enthusiast and so in 1922 when the Great Ocean Road was barely more than a rough track, and not yet open to the public, she drove from Geelong to Lorne with her mother Ethel. A contemporary photograph show the two intrepid women heavily wrapped up, standing by their car upon arrival in Lorne. The mayor of Geelong expressed his pleasure at Miss Lascelles having been the first woman to negotiate this new scenic road.

Cicely was involved in the home effort during both world wars, was a Commissioner for the Girl Guides Movement and also worked for the YMCA.  She passed away in 1989 at the age of 94.

This is what Alister Clark said about the Cicely Lascelles rose:

“I hope to see this pillar rose or climber decorating many Australian fences and posts as it is truly decorative and free and most distinct.

Nothing could be more decorative than this Rose, which forms a pillar well clad with foliage and carrying masses of semi-double pink flowers, flushed salmon.  It is a constant blooming variety which has been thoroughly tried out at Glenara.

Much out of the common, a truly decorative Rose.”

This painting is on a 51cm square natural linen canvas.  It is $240 and has been SOLD.