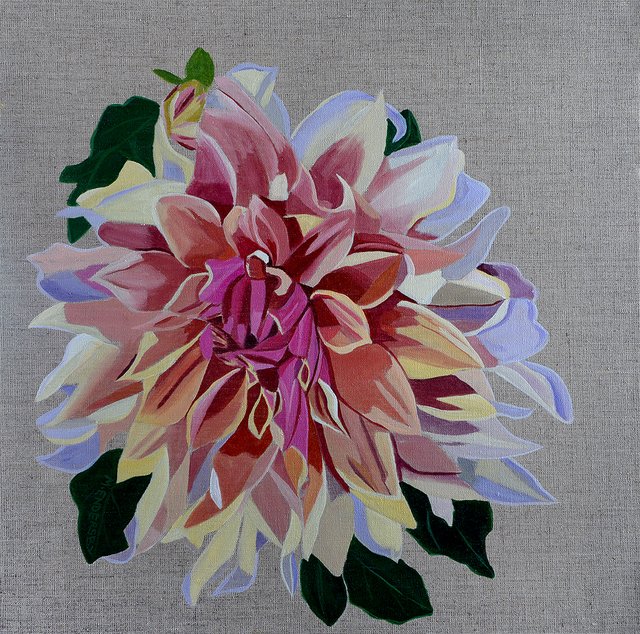 Dahlias are perennial tubers which originated in Mexico, where they were taken to the botanical gardens in Madrid and named in honour of Swedish Scientist Andreas Dahl.

I wanted to include a Dahlia in my upcoming Viewpoints Exhibition: Two Artistic Journeys Along the Great Ocean Road, because as you make your way from Melbourne to the start of the road you go close to Country Dahlias of Winchelsea.  Country Dahlia’s has Australia’s largest collection with two acres of dahlia gardens, with over 20,000 bushes and approximately 2,250 different types and is open for viewing during March and April.

This painting is of a beautiful Cafe au Lait dahlia, my favourite, and I have called it Diana’s Dahlia because the photo reference for the painting was kindly provided to me by Diana Rogers who lives in Chicago and who found it flowering on a garden visit.  I haven’t painted dahlias before but was inspired to when I saw Diana’s beautiful photo.

This painting is 51cm square on a natural linen canvas and is $240.  It is available for purchase and can be delivered to you after it has been displayed at the exhibition.