At the going down of the sun…An ANZAC Day Tribute 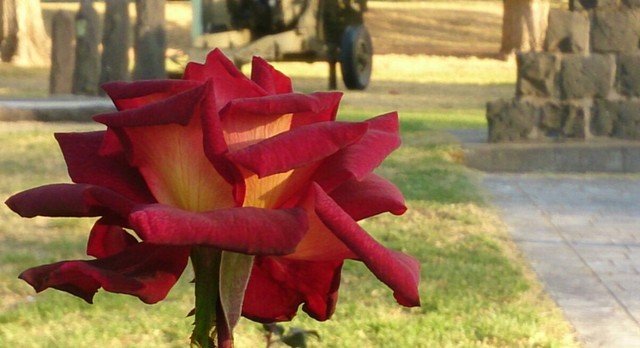 In 2012 the RSL Rose was released.  A striking burgundy rose with amber reverse petals symbolising dawn and dusk.
The RSL was formed in June 1916 by troops returning from World War One with the purpose of preserving the spirit of mateship formed amidst the carnage and horror of battle, to honour the memory of the fallen and to help each other whenever required.

Every night at 6pm in RSL clubs around Australia, ‘The Ode of Remembrance” is recited.   It is the fourth verse from the poem ‘For The Fallen’ written by Robert Laurence Binyon in September 1914.

“They shall not grow old, as we that are left grow old:
Age shall not weary them, nor the years condemn.
At the going down of the sun and in the morning,
We will remember them.”

I was standing at the war memorial in Rutherglen, a country town in Victoria just as the sun was going down and there was a single bloom of this special rose which is deep burgundy with amber reverse petals.  And such a lot of young men from this area must have headed off to war judging by all the names carved in stone (116 men from the district were killed in World War One alone).
I photographed the RSL Rose as it was lit by the setting sun, to take back to the studio to paint, as the words from Binyon’s poem went through my head.
Below is the full poem, which was written when Laurence Binyon from Lancashire was visiting Cornwall.  He sat on the cliff-tops looking out to sea taking in the dramatic scenery of the north Cornish coastline.  He wrote those famous words of the fourth verse first.
FOR THE FALLEN ~ Robert Laurence Binyon (1869-1943)
With proud thanksgiving, a mother for her children,
England mourns for her dead across the sea.
Flesh of her flesh they were, spirit of her spirit,
Fallen in the cause of the free.

Solemn the drums thrill: Death august and royal
Sings sorrow up into immortal spheres.
There is music in the midst of desolation
And a glory that shines upon our tears.

They went with songs to the battle, they were young,
Straight of limb, true of eye, steady and aglow.
They were staunch to the end against odds uncounted,
They fell with their faces to the foe.

They shall grow not old, as we that are left grow old:
Age shall not weary them, nor the years condemn.
At the going down of the sun and in the morning
We will remember them.

They mingle not with their laughing comrades again;
They sit no more at familiar tables of home;
They have no lot in our labour of the day-time;
They sleep beyond England’s foam.

But where our desires are and our hopes profound,
Felt as a well-spring that is hidden from sight,
To the innermost heart of their own land they are known
As the stars are known to the Night;