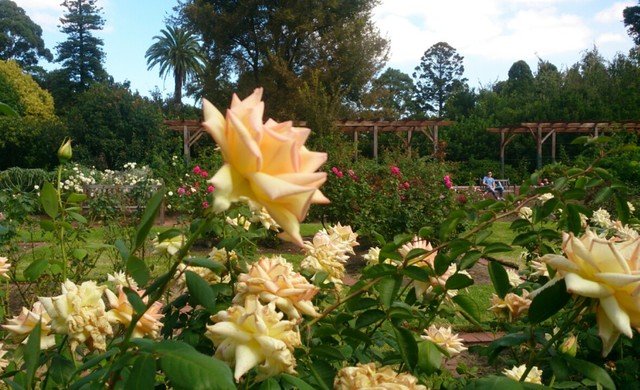 In 1859, a group of councillors had the foresight to put aside 16 acres of land for the purpose of a Botanical Garden in the newly established beachside settlement of St Kilda just 6km south-east of the heart of Melbourne.  Baron von Mueller, the then Director of the Royal Botanic Gardens contributed several hundred plants, shrubs and trees.  The Gardens opened in 1861 and 155 years later the garden contains 810 mature tree specimens, eight of which are on the significant tree register.
As the gardens are registered with Heritage Victoria and retain their 19th century feel and layout, it is an absolute delight to visit and step back in time.

A Sub-Tropical Rain-Forest Conservatory was added in the early 1990’s and it is a real delight with its boardwalks and bubbling fountains like natural springs.

From the front of the Conservatory you can see the lily pond which is home to the most whimsical sculpture created in 2004 by Ken Arnold and Corey Thomas. Named ‘The Rainman’ this solar powered statue responds to the changing light conditions.  On a sunny day rain falls onto the man and his dry outstretched hand feels the day beyond.  If a cloud passes overhead or it rains, then a dry man reaches out to feel the rain.

Bordered by Dickens, Tennyson, Blessington and Herbert Streets, the St Kilda Botanical Gardens are open between sunrise and sunset seven days a week.